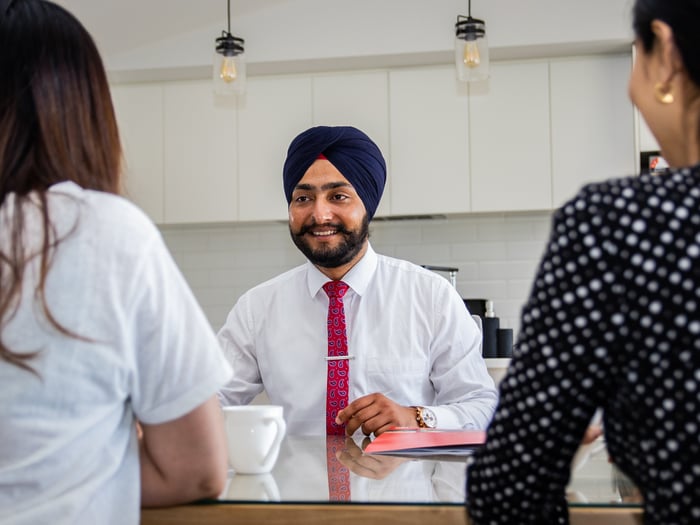 When Jasmeet Singh started in the real estate business, he heard the common refrain that an agent never sells many houses in their first year. He certainly didn’t listen; after only little over a year in the job, Jasmeet has transacted over 80 properties and counting, with the first ten coming within six months of starting in the industry.

Like many who join the real estate profession, this is not Jasmeet’s first career. Migrating from a small village in India in 2012 at 21 years old to study electronics & telecommunication in Auckland, Jasmeet knew next to no one; something he didn’t find as daunting a prospect as many would.

“I came to New Zealand specifically because I didn’t know anyone, as I’ve always wanted to do business off my own back, without relying on anyone else.

Within six months he started part-time work at a cabinetry business whilst studying, easily picking up the process of design and assembly.

“Sometimes I get frustrated with the status quo; I’m always looking to figure out ways of doing something better. Ask me to move a mountain and I’ll find a way.”

As the cabinetry position was challenging to get to without a car, he picked up a different job in the mental health field, supporting those in need where he could (given he was unqualified in the mental health space). Jasmeet quickly worked his way up whilst completing his electronics degree, gaining leadership and management positions within the company.

Jasmeet is a big believer in giving people a shot and helping them build experience, like he was given the opportunity to do.

“When I started in mental health, I knew nothing. So later I would tell senior leaders when they questioned my hiring decisions that if I can achieve this much (with no prior knowledge), I know that I can identify useful skillsets in other people and train them the right way too.”

Given his success in business, and after moving to Hamilton, Jasmeet started looking to buy a home which for him included studying the Waikato District Plan to find a suitable property for his plan of subdividing and selling.

“I found one that fit the bill just as I was about to get on a plane for a visit to India. I couldn’t help myself and purchased it without seeing it in person.

“When I returned from India, I met with the real estate agent (not from Lodge) expecting a gift but was instead offered a business partnership with him.”

This offer sparked the idea of becoming a real estate agent for Jasmeet. He turned down the business partnership, fuelled by his drive to be a self-made person and not rely on others. After approaching Lodge, he completed the real estate agent’s course within three months, becoming licensed just before the Alert Level Four lockdown in 2020.

“Everyone told me how hard it would be to get listings, and I only knew one family here in Hamilton. I continued to work in the mental health organisation in a non-management capacity so I could pay my bills.

“I didn’t tell anyone I knew that I had started in real estate for a few months, until I had sold ten houses. I wanted to be sure it was the right decision.”

His first listing is a good story, coming in his second week whilst he was managing an open home for another agent to gain experience.

“A couple looking at the property were interested in making an offer, but expressed that they would need to sell their house.

“They had already had an appraisal done by a top agent from another agency, so when they asked me to do one I wondered should I even be going there?

“I did the appraisal, and they said if I could get them the number they were looking for, I could list the property. We listed it the next day (Monday), and I sold it by the end of Friday.”

On a later sale, Jasmeet broke his golden rule of always taking a pen when he’s out and about.

“The client said not to worry and grabbed a pen to sign the offer – it was the same top agent’s pen, left after an appraisal. I’ve still got it now.”

A year on from starting in real estate, Jasmeet has recently been named in Lodge Real Estate’s top ten salespeople of the year (as ninth), and also ‘Most Promising Salesperson of the Year’, top five for the year to date, and ‘No. 1 Salesperson Lodge Dinsdale Office – year to date.’

“Despite the numbers, I am focused on quality over quantity and find I don’t need to look around for work now. I also have clients who I assist with planning renovations and design, managing the whole process before they re-sell a property.

As a Sikh, Jasmeet has shared his financial success with families back in India who he found through a charitable organisation he was involved in.

“In Sikhism you’re taught to try and help those more vulnerable than you, that was the reason I worked passionately in the mental health industry for many years. These families were suffering, whether it was due to the father passing away or a business falling apart, and I have the financial ability to help. So the more I earn, the more people I can help in this way.”

With his achievements in the past year, it seems highly unlikely he’ll need it but Jasmeet has a back-up plan should he run out of work tomorrow.

“I don’t mind going back to mental health, or maybe I could mow people’s lawns for a living. I would build up a nice big business out of the lawn work; I can’t help myself.”